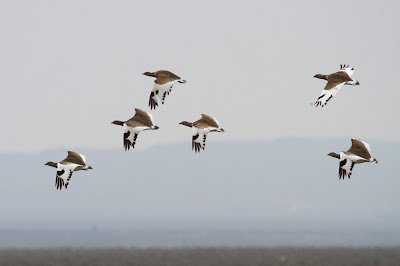 You have probably heard about Batumi Raptor Count in Georgia, but do you know Besh Barmag in Azerbaijan? Where Batumi is situated at the western end of the Caucasus, Besh Barmag is its counterpart at the eastern end. A bottleneck for migrating birds between the Caucasus mountains and the Caspian Sea that is just being explored, at the easternmost edge of the Western Palaearctic. Join us!
Besh Barmag is situated 90km north of the capital Baku and is one of the most impressive migration watch points in the Western Palearctic but still hardly known to European birders. Millions of passerines, up to 150.000 Little Bustards, tens of thousands of herons, Pygmy Cormorants, waterfowl and waders, thousands of Dalmatian Pelicans and also a great variety of raptors (up to 20 species in a day) pass the narrow coastal plain each season. The site offers great birding possibilities with a wide natural steppe, woodlands full of resting passerines and great views over the Caspian Sea and the Caucasus foothills.
Some possible species in early November: Lesser White-fronted Goose, Pygmy Cormorant, Ferrugineus Duck, Ruddy Shelduck, Great White Egret, Dalmatian Pelican, Black Vulture, Imperial Eagle, Steppe Eagle, Great Spotted Eagle, Golden Eagle, Pallid Harrier, Hen Harrier, Saker, Peregrine, Long-legged Buzzard, Little Bustard, Dotterel, Pallas´s Gull, interesting Larus complex, Black-bellied Sandgrouse, Calandra Lark, Lesser Short-toed Lark, White-winged Lark, Oriental Skylark, Richards Pipit, Asian Buff-bellied Pipit, Caspian Stonechat, Moustached Warbler, Mountain Chiffchaff, Red-breasted Flycatcher, Penduline Tit, Pine Bunting. Good chance of eastern vagrants with eg Taiga Flycatcher, Yellow-browed Warbler, Dusky Warbler, Little Bunting and Isabelline Shrike seen.
Now is your chance to join us for one or two weeks of low-cost birding adventure and exciting migration studies during 4-18 November 2017! We will stay in a small hotel nearby and do daily counts at the watch point and in the process also train young Azeri naturalists in bird identification and counting skills. There will also be additional excursions to other areas like the Greater Caucasus or the famous Shirvan National Park, both of which are a few hours drive away.
You buy your own air ticket (f.ex. Turkish Airlines, starting from 250€ return trip from many European cities, see www.thy.com ) and online tourist visa (80€) and on site we share transport, accommodation and food. Total cost per person an estimated 700€ for one week and 950€ for two weeks.
Interested? Contact leader Kai Gauger kai_gauger@yahoo.de and read more about previous birding trips to Besh Barmag at our web www.birdingaze.blogspot.com and www.facebook.com/BirdingAze
Eingestellt von Birding Azerbaijan um 11:16