From 28.10. to 09.11. I did a  trip with some friends from Germany. See what we could find during these two successfull weeks!
We arrived in Baku early morning, got our cars at the airport and started immediately to the field. At sunrise we arrived at Besh Barmag, Michas place for the migration counts. He was not there at this time, hanging around in Tiflis and waiting for a new visa... So we took over his work for some time. Although the weather was not the best it was great with thousands of migrating passerines, many harriers, including several Pallid Harriers, Hobbys, hundreds of Great Egrets, huge flocks of Common Cranes, some flocks of geese amoung which we could identify some Lesser White-frontted Geese. The first afternoon we where on the mountain and there was strong migration of raptors. Within only one hour we counted 17 Imperial Eagles, 80 Steppe Eagles, about 250 unidentified large eagles, a late Booted Eagle, a Lanner Falcon and lots of other stuff. There was also a resident Rough-legged Buzzard, a rare visitor here and the first I saw in Aze.
In the plain there where hundres of resting larks and buntings and we found at least 5 Pine Buntings. The next days the migration was a bit less and so we birded along the lagoons and in the bushes at the coast. There were lots of Moustached Warblers, Chiffchaffs, Bluethroats, Red-breasted Flycatchers and several Stonechats but the two best birds where a Asian Buff-bellied Pipit amoung coutellii-Water Pipits (2. record) and a Desert Wheatear at the shore, another first in Aze for me and only the second modern record. At the dump of the chicken factory there where about 5000 Caspian Gulls, some heuglins-Gulls, up to 15 Black Kites and 28 Black Vultures.

Our next stop was in the Candy Cane Mountains on the way to Alti Agach where there were also many resting passerines in the bushes and we also saw nice Finsch's Wheatears. At Cape Gilazi we had a couple of waders, 75 Bewick Swans and two Purple Gallinules. After one of our cars got stuck in the mud we had to organise a tractor to pull it out again an we were lucky that we were just next to a village and it took us less then an hour! Dirty and exhausted as we were we decided to spend the evening in Baku to relax in the hamam- always great! In the night we went further to Gobustan and piched our tents there.
The next morning we got nice views of some Chukars, more Finsch's Wheatears, two Rock Buntings and a migrating Greater Spotted Eagle. We continued south to Shirven NP where we spend the night in the house at the lake. At the roost there where only about 6500 Starlings, but 8000 Rooks, many Hen Harriers, several Merlins, 590 Magpies and still 5 Blue-cheeked Bea-eaters. At the lake we saw Feriginous Ducks and Marbeled Teals amoung many other species of waterfowl. Again there were 80 Bewick Swans, Purple Gallinules, 380 Greater Flamingos, 26 Dalmatian Pelicans, 3 Marsh Sandpipers, 2 Dotterels, a Great Bittern, 3 Greater Spotted Eagles, 3 White-tailed Eagles and a Saker Falcon. Quite surprising was a male Ring Ouzel, the first time I saw one in the lowland. 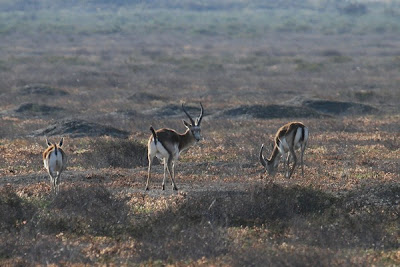 Again we went further south and had a short stop at Machmudchala where there were about 9500 ducks, mainly Shovelers and Teals and we could find some White-headed Ducks amoung them. Other birds were e.g. 180 Avocets, 2 White-tailed Eagles, 3 Pallas's Gulls and two Dalmatian Pelicans. We spend the night in huts near Masalli and visited Kizil Agach the next day.
There birding was great as always! Still there were several Whiskered Terns and a single White-winged Tern, 150 Slender-billed Gulls, a single Pallas's Gull, about 700 waders, including at least 12 Broad-billed Sandpipers, some Temmincks and Marsh Sandpipers and a single Jack Snipe. Very interesting were the passerines: There was a single Citrine Wagtail, and although it was Nov 3rd but we had two Lesser Whitethroats (but didn't get close enough views for any subspecies ID) and an adult male Red-backed Shrike. But the highlight was a Raddes Accentor. As far as I know the only record in Azerbaijan away from the small breeding area in the Talsh Mountains!

After spending the night in the beautiful Täbässüm Resort in the Hirkan forest the next day was dominated by driving. We went all the way to Migechevir with some short birding stops on the way. We saw e.g. a dozen White Storks, 25 Ferruginous Ducks, several White-tailed Plovers and a Pallid Harrier.
Around Mingechevir, the reservoir and the quarry ponds we had a lot of Armenian Gulls, Pygmy Cormorants, some late Cattle Egrets, a Bittern and much more. Very nice was a flock of more then 40 White-tailed Plovers. 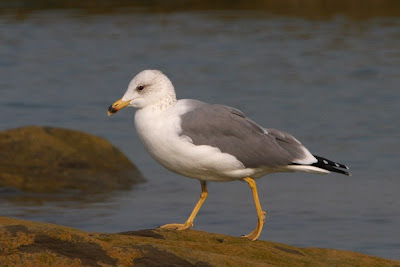 The next region to visit was the Adjinour, one of my favourite places in Aze, and it was great! At the salt lake we counted more then 5000 Flamingos, 1700 Ruddy Shelducks, 800 Shelducks, 200 Kentish Plovers, 300 Avocets and o lot more. We camped in a small valley and did a fine Shashlik with meat we had bought at the bazar in Mingechevir -superb! The next morning we went down to the western end of the Mingechevir reservoir and the Alazan delta. I had never been there before and it is a really nice landscape. Best amoung birds were about 400 Pallas's Gulls! Driving around in the steppe we saw many Long-legged Buzzards, Merlins, Hen Harriers, a group of resting Cranes, 2 Great Grey Shrikes of which one was most likely a homeyeri and an impressive flock of at least 10000 Calandra Larks! Unfortunately it started to rain and we could not really enjoy it. The ground roads got so slippery that it was nearly impossible to drive and we had to leave the site.
During the night in an old soviet style hotel in Sheki the temperture had declined and the next morning all was covered with 10 cm of snow. As it was still snowing we could not do a lot but after Micha had called and told us about his crazy numbers of Little Bustards and other migrants at Besh Barmag we decided to go there again and spend the last two days there. It was a long drive in snow and rain but turned out to be a good decision. Arriving there in the evening the wheather conditions got better and the next days were perfect! There were still thousands of Little Bustards passing the site, flocks of hundreds of Pygmy Cormorants, some Black-bellied Sandgrouses, lots of passerines in the bushes, a Richards Pipit, which I only heard unfortunately, a flock of 35 Dotterels and much more. 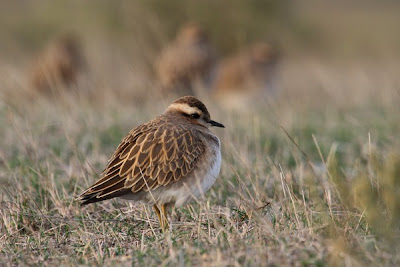 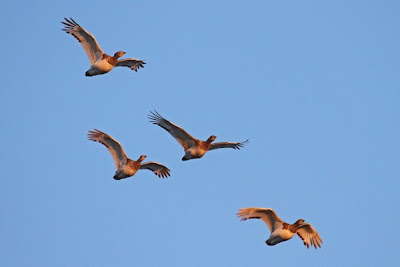 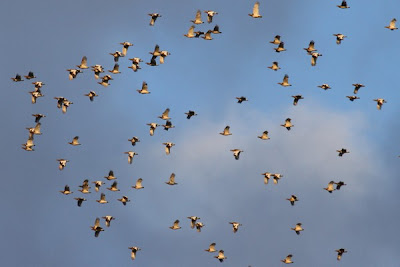 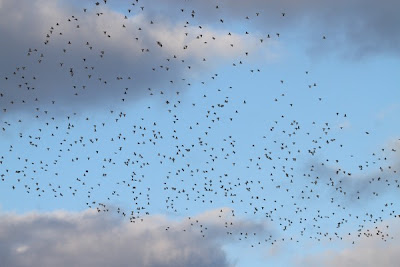 What a great time to go birding in Aze! Thanks to all of you for this perfect trip!
Eingestellt von Birding Azerbaijan um 13:25