From 22nd February to 6th March 2010, we organised a field trip to Azerbaijan. Two friends from Germany joined the expedition. The wintertime is maybe not the best time to visit the country, but it offers great opportunities to see rare wintering species like larks and buntings from western Asia, impressive numbers of waterfowl or globally threatened bird species.

Our tour started on 22nd February in Baku with a rented 4WD. We spent the night mostly in tents. On the first day, we followed the main road from Baku to Shamakhi to reach the steppes of Gobustan. Besides the road we saw some Griffon Vultures and flocks of Starlings, Eurasian Skylarks and Calandra Larks. The first highlight was a beautiful White-winged Lark. 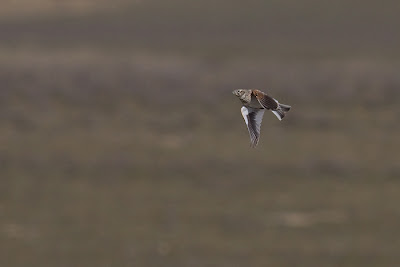 Further into the steppes we reached a rocky outcrop and found a pair of Lanner Falcons, two singing Finsch's Wheatears and some Isabelline Wheatears. In the evening we reach the mud volcanoes, where we spent the night in tents. 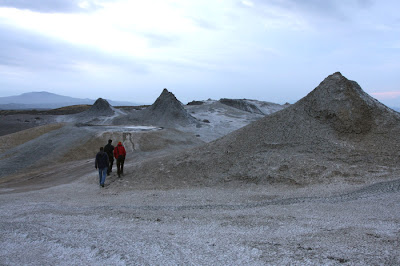 The next day we headed further south. In the steppe, we saw a single Ruddy Shelduck, larks and Isabelline Weathears. At a stony cliff we found Rock Sparrows, Western Rock Nuthatchs, Finsch's Wheatears and a pair Red-billed Chough chasing a Golden Eagle.
The next stop was at the famous ancient rock engravings of Gobustan where we found Rock Buntings, Finsch's Wheatears, Rock Sparrows, Western Rock Nuthatchs, 25 Woodlarks, Red-fronted Serins and displaying Long-legged Buzzards.

We spend the following two days in the Shirvan National Park. The steppes produced Greylag, 7 Lesser and some Greater White-fronted Geese, Common and Ruddy Shelducks, Black Francolins, only 4 Little Bustards and some hundred larks. The lake within the National Park offered several duck species, 2 Grey-headed Swamphens, our first Pallas's Gull, Flamingos, Dalmatian Pelicans and 200 Pygmy Cormorants. In the evening dozens of Hen Harriers flew in to roost in the reedbeds of the lake.


On 25th February, we birded in the Kura delta, but what we found was a waterfowl hunt of some locals. In one line six hunters waded through a long but rather narrow lagoon , which was full of waterfowl, mostly Coots. They pushed the fleeing waterfowl to the one end of the lagoon. Here, at the end of the lagoon, was no escape for the swimming birds, so they start flying. Most of the birds flew overhead of the hunters to reach the other side of the lagoon, but this was for many birds a deadly mistake. As Coots are bad flyers, they are now easy targets for the shooting hunters. 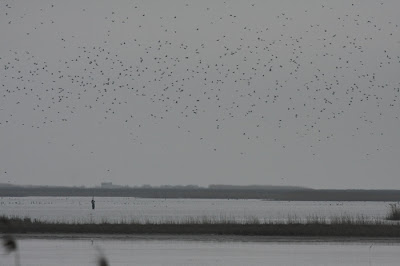 Further into the south, we visited the Kizil Agach Bay. Here we also found hunting activity and distant shooting was heard throughout the days in that region. Interestingly, the biggest concentration of waterfowl was found in the Mahmudhala Hunting Sanctuary with about 35000 ducks. Among them, we found only 11 White-headed Ducks.
In the Kizil Agach Bay around Liman and Nerimanabad we observed more than 200 Dalamtian Pelicans, 176 Pallas’s Gulls, 800 Little Gulls, 500 Whiskered Terns and hundreds of cormorants, waders and ducks. Interesting highlights were a Terek Sandpiper and a Heuglin’s Gull. After a cold night camping in the montane semi-desert of the Zuvand upland we birded  around Gosmalijan and Pirasora on 28th February. The higher mountains were still snow covered. The best observations in this area were two male and a female Pine Buntings. 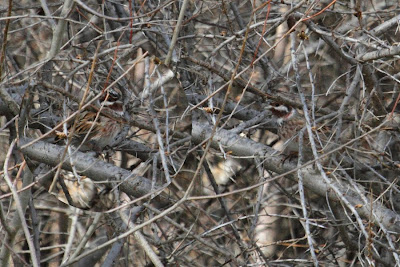 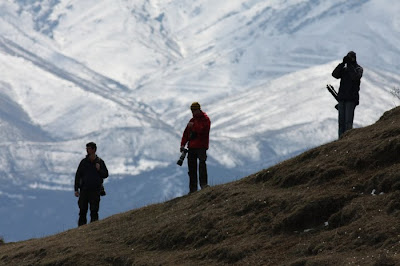 We then continued our round trip through the country and drove to the Adjinohur valley near Mingechevir. A short stop besides the main road offered 2 White-tailed Lapwings and our first larger flock of 90 Little Bustards. 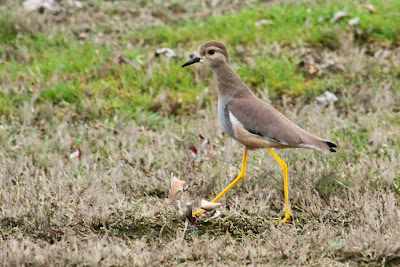 We spent the night in a hotel near the Kura river in Mingechevir and were quite surprised how rich the bird life was within the city. We saw from the hotel 8 Armenian Gulls, 6 Pallas’s Gulls, 30 Black-crowned Night Herons, 250 Pygmy Cormorants and a Red-fronted Serin.

After leaving the town we birded 2 days in the Adjinohur valley. Besides the road we saw regularly Eastern Imperial Eagles, Long-legged Buzzards, Steppe and Greater Spotted Eagles, Griffon and Cinereous Vultures, harriers, Lapwings, hundreds of larks, mainly Sky, Lesser Short-toed and Calandra, and Isabelline Wheathears. Beautiful sights were several flocks of Red-fronted Serins and we estimated a total of 500 individuals. Furthermore, we found 4 Pine Buntings in a village. 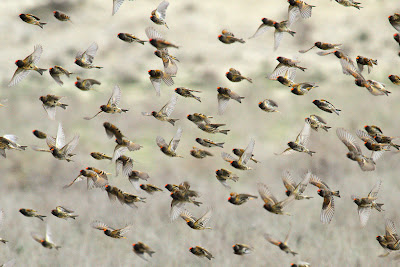 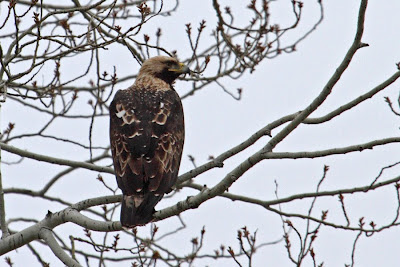 At the central lake we saw 1200 Flamingos, 300 Ruddy Shelducks, 2500 Greater and 40 Lesser White-fronted Geese and 5 Red-breasted Geese. However, the highlight of the trip was the mass of Little Bustards. In the Adjinohur valley we found an very impressive flock of 25000 individuals. 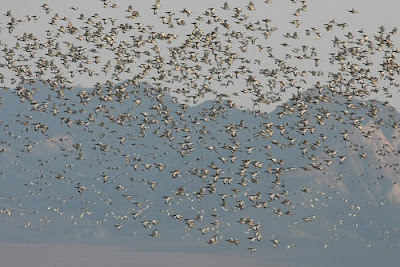 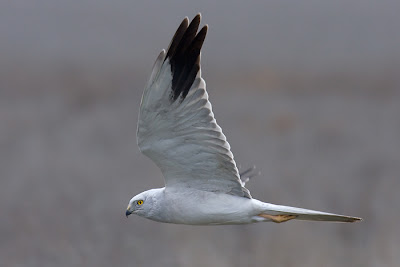 We then returned to the Shirvan National Park where we spent our last night in the field. At the lake we saw 185 Dalmatian Pelicans, Pygmy Cormorants, Flamingos, larks, pipits, singing Cetti's and Moustached Warblers, displaying Black Francolins and again two huge flocks of Little Bustards with 10000 and 50-70000 individuals. 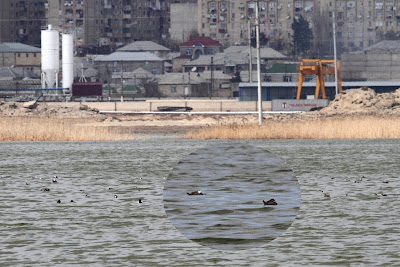 The famous IBA "Red Lake" is under threat of local construction works. But still White-headed ducks can be found in large numbers here © Kai Gauger

On our last day we drove back to Baku with some birding stops at the Gobustan rock engravings where we found a Wallcreeper and at the “Red Lake” with 147 White-headed Ducks and 15 Mediterranean Gulls.